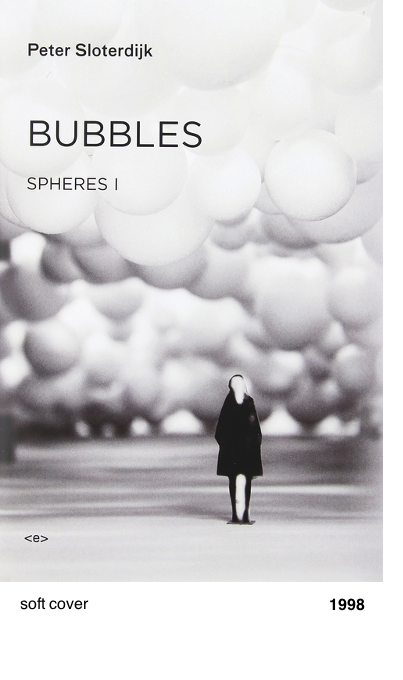 An epic project in both size and purview, Peter Sloterdijk’s three-volume, 2,500-page Spheres is the late-twentieth-century bookend to Heidegger’s Being and Time. Rejecting the century’s predominant philosophical focus on temporality, Sloterdijk, a self-described „student of the air,“ reinterprets the history of Western metaphysics as an inherently spatial and immunological project, from the discovery of self (bubble) to the exploration of world (globe) to the poetics of plurality (foam). Exploring macro- and micro-space from the Greek agora to the contemporary urban apartment, Sloterdijk is able to synthesize, with immense erudition, the spatial theories of Aristotle, René Descartes, Gaston Bachelard, Walter Benjamin, and Georges Bataille into a morphology of shared, or multipolar, dwelling–identifying the question of being as one bound up with the aerial technology of architectonics and anthropogenesis.Sloterdijk describes Bubbles, the first volume of Spheres, as a general theory of the structures that allow couplings–or as the book’s original intended subtitle put it, an „archeology of the intimate.“ Bubbles includes a wide array of images, not to illustrate Sloterdijk’s discourse, but to offer a spatial and visual „parallel narrative“ to his exploration of bubbles.Written over the course of a decade, the Spheres trilogy has waited another decade for its much-anticipated English translation from Semiotext(e). Volumes II, Globes, and III, Foam, will be published in the coming seasons.

„Peter Sloterdijk is one of the most extraordinary philosophers working today. No Enlightenment truisms remain undisturbed by his joyous and polyphonic investigations into the meaning of the spherical. The appearance of Volume 1, Bubbles, is a major event that will finally allow the English-speaking world to experience the many dimensions of his thinking which is a toolbox for art and architecture.“ — Hans Ulrich Obrist

„Peter Sloterdijk’s expansive trilogy Sphären ( Spheres I-III, 1998, 1999,2004) explores myriad spaces — from the microsphere of the uterus to themacrosphere of the nation-state — that are fundamental to the formation of human life but often overlooked by philosophers. At once polemical and holistic in approach, Sloterdijk allows us to come to terms with the ever-retooled systems that structure our lives.“ — Hal Foster

„It is about time that the English-speaking world begin to appreciate what is, without question, the most important work in philosophy of nature to appear since the irruption of the ecological crisis at the forefront of our consciousness and political order. Many naturalists, activists, political scientists, and ecologists have been nibbling at the notion of nature. But Peter Sloterdijk, in this first volume of his giant trilogy, goes much further and deeper since he renews what it is to be thrown Œin¹ the world by totally renewing what it means to talk about the natural and social sciences as well as the humanities. It is only if we profit from Sloterdijk’s infectious concept of ‚envelopes‘ and ’spheres‘ that we might at last begin to prepare ourselves for living with and in Gaia instead of against and out of her.“ — Bruno Latour

„… Bubbles is as much an essential guide to modern space as it is a philosophical epic about dwelling and thinking.“ — Brian Dillon, The Guardian

„[ Bubbles] is perhaps best read as a long philosophical poem, powerfully expressive of the modern experience of disorientation and loneliness, wrenching itself into bizarre shapes in its imperfect attempt to conjure an ancient wholeness.“– Adam Kirsch, Times Literary Supplement