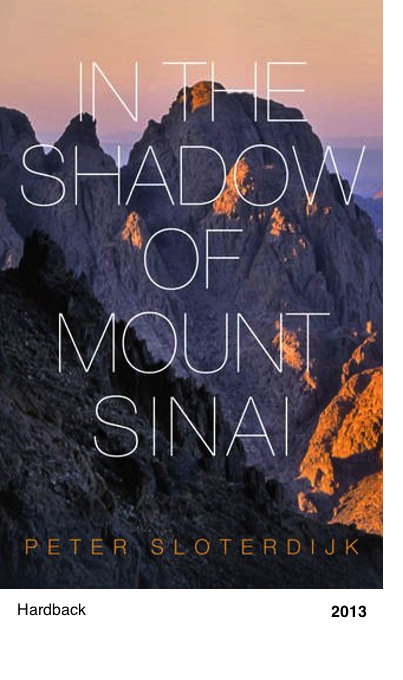 In this short book Peter Sloterdijk clarifies his views on religion and its role in pre–modern and modern societies. He begins by returning to the Mount Sinai episode in the Book of Exodus, where he identifies the emergence of what he calls the ‘Sinai Schema’. At the core of monotheism is the logic of belonging to a community of confession, of being a true believer – this is what Sloterdijk calls the Sinai Schema. To be a member of a people means that you submit to the beliefs of the community just as you submit to its language. Monotheism is predicated on the logic of one God who demands your utmost loyalty. Hence at the core of monotheism is also the fear of apotheosis, of heresy, of heterodoxy. So monotheism is associated first and foremost with a certain kind of internal violence Ð namely, a violence against those who violate their membership through a break in loyalty and trust.

On the basis of this analysis of the inner logic of monotheism, Sloterdijk retraces its historical legacy and shows how this account enables us to understand why we react so nervously today to all forms of fundamentalism – whether that of radical Islamists, the Catholic Pius Brotherhood or evangelical sects in the USA.

„Subjectivity is minted in the fire of introjected violence, we learned from Adorno and Horkheimer. Sloterdijk, following on their trail, argues in this short but rich essay, that the ritualistic violence of orthodoxy that is the crucible of peoples is prior and more foundational. God is born from and kept alive by the blood of martyrs to the purity of a people’s faith. But he beams a light of hope: religion can be its own antidote.“ – Eduardo Mendieta, Penn State University