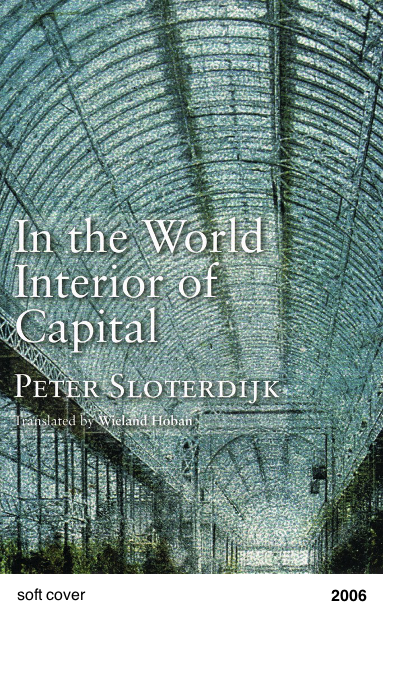 Displaying the distinctive combination of narration and philosophy for which he is well known, this new book by Peter Sloterdijk develops a radically new account of globalization at the beginning of the twenty-first century. The author takes seriously the historical and philosophical consequences of the notion of the earth as a globe, arriving at the thesis that what is praised or decried as globalization is actually the end phase in a process that began with the first circumnavigation of the earth Ð and that one can already discern elements of a new era beyond globalization.

In the end phase of globalization, the world system completed its development and, as a capitalist system, came to determine all conditions of life. Sloterdijk takes the Crystal Palace in London, the site of the first world exhibition in 1851, as the most expressive metaphor for this situation. The palace demonstrates the inevitable exclusivity of globalization as the construction of a comfort structure Ð that is, the establishment and expansion of a world interior whose boundaries are invisible, yet virtually insurmountable from without, and which is inhabited by one and a half billion winners of globalization; three times this number are left standing outside the door.

„Confirms Sloterdijk as the thinking European’s Slavoj ?i?ek, as restlessly digressive as his Slovenian counterpart, but even more intellectually reckless and better company.“ – The Guardian

„In the last few years Sloterdijk has moved from a figure of relative obscurity in Anglophone debates to being one of the key thinkers of our time. This wide-ranging, engaging, thoughtful and provocative book illustrates why. An unashamedly grand narrative, it engages with both the philosophical and political complexities of the question of the world. It is once again presented in a very fine translation by Wieland Hoban.“ – Stuart Elden, Durham University

„Peter Sloterdijk never disappoints when it comes to producing an original point of view. Equally, he never disappoints in the magnitude of his ambitions. In this deeply original and hyper-ambitious book, he presents a history of globalization, no less. In doing so, he resurrects what has become a tired and hackneyed term by reconstituting it as a drama of location but one wherein the notion of location is itself brought into the play as a central element of the plot. And what a play it is, the play of an ever-increasing density of events and an ever-decreasing concentration of purpose which – if we’re not very careful – will produce a ‚last orb‘. Wonderful stuff which restores our faith in the power of grand narratives.“ – Nigel Thrift, University of Warwick