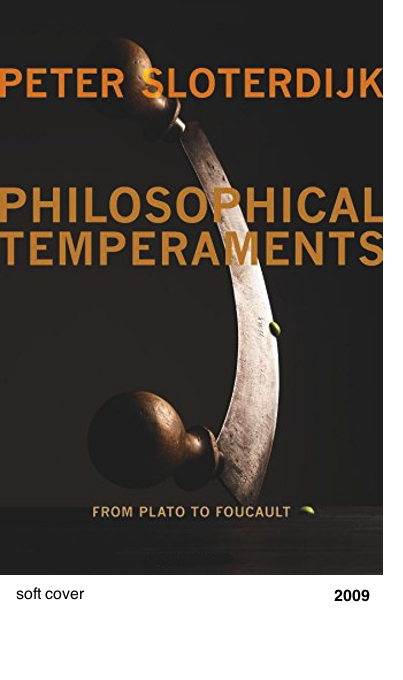 From Plato to Foucault

Translated by Thomas Dunlap with a foreword by Creston Davis

Peter Sloterdijk turns his keen eye to the history of western thought, conducting colorful readings of the lives and ideas of the world’s most influential intellectuals. Featuring nineteen vignettes rich in personal characterizations and theoretical analysis, Sloterdijk’s companionable volume casts the development of philosophical thinking not as a buildup of compelling books and arguments but as a lifelong, intimate struggle with intellectual and spiritual movements, filled with as many pitfalls and derailments as transcendent breakthroughs.

Sloterdijk delves into the work and times of Aristotle, Augustine, Bruno, Descartes, Foucault, Fichte, Hegel, Husserl, Kant, Kierkegaard, Leibniz, Marx, Nietzsche, Pascal, Plato, Sartre, Schelling, Schopenhauer, and Wittgenstein. He provocatively juxtaposes Plato against shamanism and Marx against Gnosticism, revealing both the vital external influences shaping these intellectuals‘ thought and the excitement and wonder generated by the application of their thinking in the real world. The philosophical „temperament“ as conceived by Sloterdijk represents the uniquely creative encounter between the mind and a diverse array of cultures. It marks these philosophers‘ singular achievements and the special dynamic at play in philosophy as a whole. Creston Davis’s introduction details Sloterdijk’s own temperament, surveying the celebrated thinker’s intellectual context, rhetorical style, and philosophical persona.

„Overall, this is a scintillating introduction for Anglophone readers to a stimulating provocateur of contemporary European intellectual culture.“ — Choice

„Peter Sloterdijk is not only an original thinker but is probably on the way to being one of the world’s most prominent ‚public philosophers.‘ In this book, he provides brief, highly charged, and colorful readings of the characters, lives, and ideas of leading Western philosophers.“ — Carl Raschke, senior editor of the Journal for Cultural and Religious Theory

„Philosophical Temperaments is in fact a creative reworking of the idea of an introduction to philosophy. It invites readers to taste philosophy itself, to somehow catch that elusive sense of what it means to think.“ — Ward Blanton, University of Kent