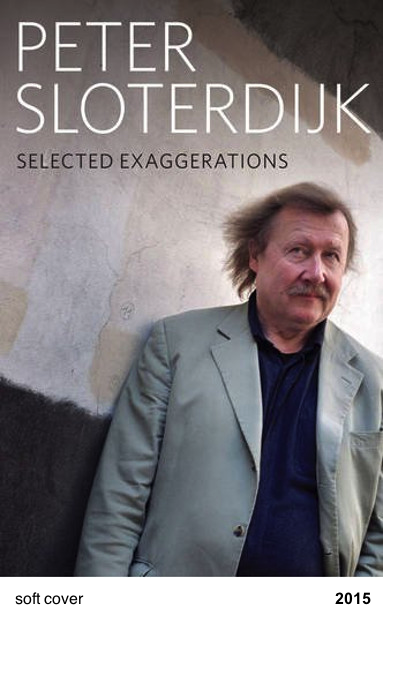 Peter Sloterdijk’s reputation as an original thinker of our times has grown steadily since the early 1980s. This volume of over 30 conversations and interviews spanning two decades illuminates the multiple interconnections of his life and work.

In these wide-ranging dialogues and discussions Sloterdijk gives his views on a variety of topics, from doping to doxa, design to dogma, media to mobility and the financial crisis to football. Here we encounter Sloterdijk from every angle: as he expounds his ideas on the philosophical tradition and the latest strands of contemporary thought, as he analyses the problems of our age and as he provides a new and startling perspective on everyday events. Through exaggeration, Sloterdijk draws our attention to crucial issues and controversies and makes us aware of their implications for society and the individual. Always eager to share his knowledge and erudition, he reveals himself equally at home in ancient Babylon, in the channels of the mass media and on the ethical and moral terrain of religion, education or genetic engineering.

Appealing both to the seasoned reader of Sloterdijk and to the curious newcomer, these dialogues offer refreshing and entertaining insight into the intellectual and political events of recent decades. They also give us glimpses of Sloterdijk’s own life story, from his early passionate love of reading and writing to his journeys in East and West, his commitment to Europe and his acceptance and enjoyment of the role of a public intellectual and philosopher in the 21st century.

‚Selected Exaggerations presents a blow-by-blow chronicle of an intellectual journey, one of the most remarkable of our time. In it, we follow Sloterdijk as he comments on his work in progress and current affairs over a twenty-year period. Often mischievous, sometimes maddening, always thought-provoking, Sloterdijk is a force to be reckoned with. With this publication, the English-speaking world finally has a one-volume introduction to this extraordinary thinker.-Brian Massumi, University of Montréal

In Place of a Preface
Bernhard Klein in conversation with Peter Sloterdijk in Karlsruhe, Dec. 2012

Why are People Media?

World Estrangement and Diagnosis of our Times

We re Always Riding Down Maternity Drive

Tackling the Unspoken Things in Culture

On Wealth and Self-Respect

Learning Is Joyful Anticipation of Oneself

There Are No Individuals

Germans Want to Be Compelled: Theory for the Year s End

Image and Perspective. An Experiment in Atmospheric Seeing

On Progress. The Holy Fire of Dissatisfaction

A Team of Hermaphrodites

Under a Brighter Sky

Making the Effort: The Reader

Fathers Should Be Kept Away from Brothels and Pubs

The Athletics of Dying

Do Your Duty to Enjoy!

Even a God Can t Save Us

A Plug for Higher Energies

Mortgaging the Air: The Financial Crisis

Is There a Way Out of the Crisis of Western Culture?

Questions of Fate: A Novel About Thought

Humans in Repetition / The 21st Century will be Acrobatic

With the Babble of Babylon in the Background