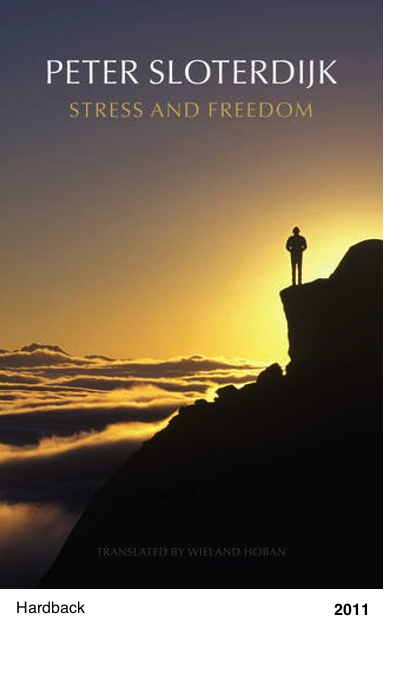 In this short book Peter Sloterdijk offers a genealogy of the concept of freedom from Ancient Greece to the present day. This genealogy is part of a broader theory of the large political body, according to which Sloterdijk argues that political communities arise in response to a form of anxiety or stress. Through a highly original reading of Rousseau’s late Reveries of a Solitary Walker, Sloterdijk shows that, for Rousseau, the modern subject emerges as a subject free of all stress, unburdened by the cares of the world. Most of modern philosophy, and above all German Idealism, is an attempt to reign back Rousseau’s useless and anarchical subject and anchor it in the cares of the world, in the task of having to produce both the world and itself. In the light of this highly original account, Sloterdijk develops his own distinctive account of freedom, where freedom is conceptualized as the availability for the improbable.

„In this essay on the meaning of freedom today Peter Sloterdijk offers a stunning account of our post–modern predicaments. He writes as ever with polemical verve and great wit, tracing an aberrant freedom from the dissidence of Rousseau’s figure of the solitary walker to the existential principles of Beckett’s neglected first play Eleutheria. The result is an impassioned tour de force in defence of freedom and a call for a renewed ethic of liberality and generosity. This is a must read.“ – Keith Ansell–Pearson, University of Warwick