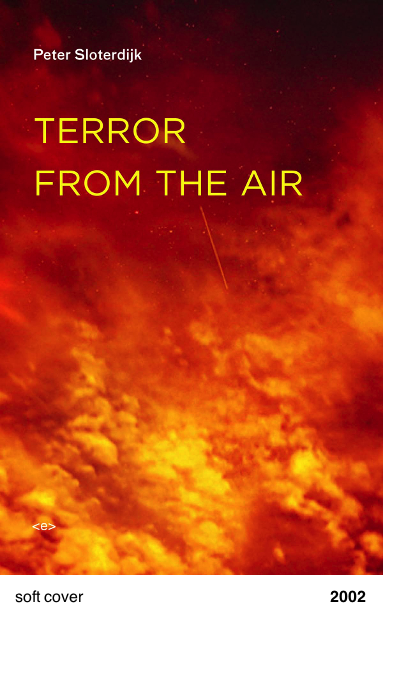 According to Peter Sloterdijk, the twentieth century started on a specific day and place: April 22, 1915, at Ypres in Northern France. That day, the German army used a chlorine gas meant to exterminate indiscriminately. Until then, war, as described by Clausewitz and practiced by Napoleon, involved attacking the adversary’s vital function first. Using poison gas signaled the passage from classical war to terrorism. This terror from the air inaugurated an era in which the main idea was no longer to target the enemy’s body, but their environment. From then on, what would be attacked in wartime as well as in peacetime would be the very conditions necessary for life.

This kind of terrorism became the matrix of modern and postmodern war, from World War I’s toxic gas to the Nazi Zyklon B used in Auschwitz, from the bombing of Dresden to the attack on the World Trade Center. Sloterdijk goes on to describe the offensive of modern aesthetics, aesthetic terrorism from Surrealism to Malevich—an „atmo-terrorism“ in the arts that parallels the assault on environment that had originated in warfare.

„At times Sloterdijk is hard work, but he more than compensates for that with virtuoso passages in which insight is piled upon insight. [The book] is above all a plea for realism in the face of the monumental difficulties of modernity and in the wake of a century of huge destructiveness. It creeps up on you, and leaves you breathless.“ – William Wiles, iconeye: icon magazine online