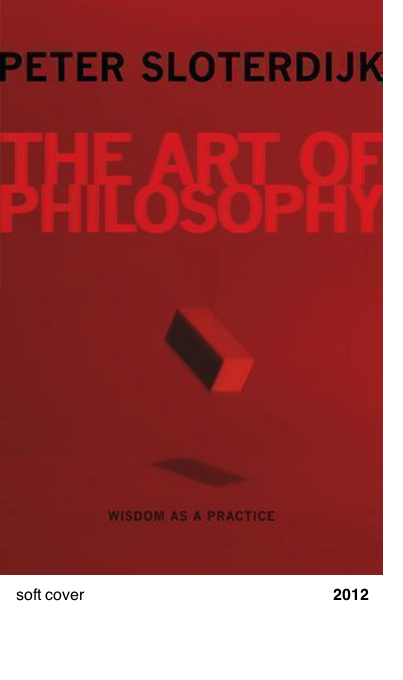 Wisdom as a Practice

In his best-selling book You Must Change Your Life, Peter Sloterdijk argued exercise and practice were crucial to the human condition. In The Art of Philosophy, he extends this critique to academic science and scholarship, casting the training processes of academic study as key to the production of sophisticated thought. Infused with humor and provocative insight, The Art of Philosophy further integrates philosophy and human existence, richly detailing the foundations of this relationship and its transformative role in making the postmodern self.

Sloterdijk begins with Plato’s description of Socrates, whose internal monologues were so absorbing they often rooted the philosopher in place. The original academy, Sloterdijk argues, taught scholars to lose themselves in thought, and today’s universities continue this tradition by offering scope for Plato’s „accommodations for absences.“ By training scholars to practice thinking as an occupation transcending daily time and space, universities create the environment in which thought makes wisdom possible. Traversing the history of asceticism, the concept of suspended animation, and the theory of the neutral observer, Sloterdijk traces the evolution of philosophical practice from ancient times to today, showing how scholars can remain true to the tradition of „the examined life“ even when the temporal dimension no longer corresponds to the eternal. Building on the work of Husserl, Heidegger, Nietzsche, Arendt, and other practitioners of the life of theory, Sloterdijk launches a posthumanist defense of philosophical inquiry and its everyday, therapeutic value.

„A very provocative, historically penetrating, and paradigm-changing analysis of both modern and postmodern thought, which may be considered one of Peter Sloterdijk’s most brilliant contributions to date to what has come to be called ‚public philosophy.‘ This translation is vigorous and engaging and captures in different contexts the ramifications and rhetorical force of Sloterdijk’s original German.“ — Carl Raschke, University of Denver

„I am unaware of any other writer who so successfully merges creative rethinking of the philosophical and religious past. In this respect, I think Sloterdijk’s work represents for me something like a gold standard. It is humorous, provocative, and deeply insightful.“ — Ward Blanton, University of Glasgow