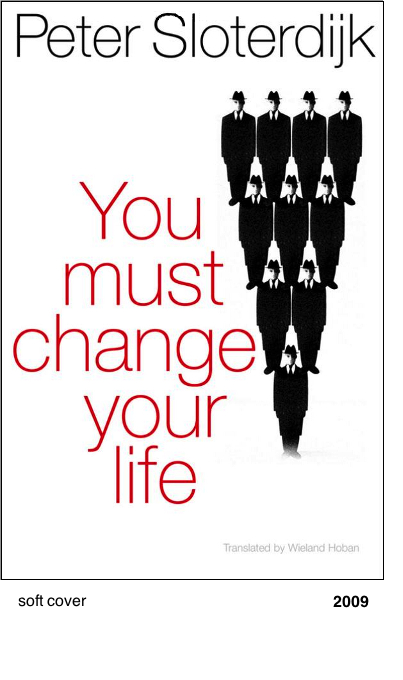 In his major investigation into the nature of humans, Peter Sloterdijk presents a critique of myth – the myth of the return of religion. For it is not religion that is returning; rather, there is something else quite profound that is taking on increasing significance in the present: the human as a practising, training being, one that creates itself through exercises and thereby transcends itself. Rainer Maria Rilke formulated the drive towards such self-training in the early twentieth century in the imperative ‚You must change your life‘.
In making his case for the expansion of the practice zone for individuals and for society as a whole, Sloterdijk develops a fundamental and fundamentally new anthropology. The core of his science of the human being is an insight into the self-formation of all things human. The activity of both individuals and collectives constantly comes back to affect them: work affects the worker, communication the communicator, feelings the feeler.

It is those humans who engage expressly in practice that embody this mode of existence most clearly: farmers, workers, warriors, writers, yogis, rhetoricians, musicians or models. By examining their training plans and peak performances, this book offers a panorama of exercises that are necessary to be, and remain, a human being.

„A challenging, powerful, and at times frustrating read, Sloterdijk ranges widely across literatures and topics, inspiring and provoking in equal measure. He is fortunate to have Wieland Hoban as his excellent translator. A very good antidote to the chicken-soup banalities of Alain de Botton.“ – Stuart Elden, Durham University

„Challenging the pious and self-righteous alarm of those who have declared war on the return to religion, Sloterdijk – in his typically original irreverence – argues that we cannot see today’s religiosity as any sort of return. What is really at stake is the formation of the self through practices. Charting a path beyond liberal critiques of religion and post-secular pseudo-returns to spirit, Sloterdijk provides a genuinely twenty-first century approach to the problem of life-formation. This book opens up new ways of thinking about life after humanism without lapsing into the simple affirmations of the post-human.“ – Claire Colebrook, Penn State University

„Peter Sloterdijk has assembled in this book the most amazing series of practices invented in history to hold humans souls suspended to a virtual hook slightly above their head. The result is a totally original analysis of religion by the most important philosopher or rather educator of today.“ – Bruno Latour, Ecole des mines, Paris